Posted on 7 Ιουλίου, 2015 by ierapostoli

On June 7th, 2015, an OCMC Mission Team helping to construct a school in the village of Loupwala, in northern Kenya, was blessed with the opportunity to also participate in the consecration of the newly-completed St. Nicholas Church in the nearby village of Lokichar. 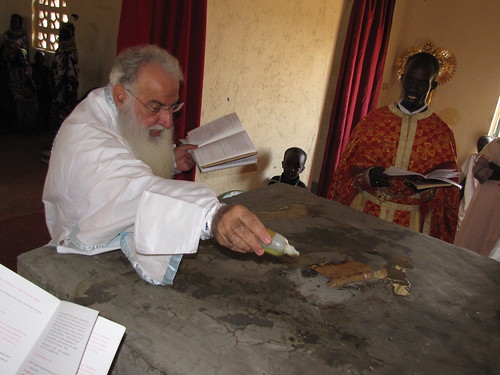 His Eminence Makarios, Archbishop of Kenya consecrates the newly constructed St. Nicholas Church in Lokichar, Kenya. The church was built with funds generously donated by the Chronis family of Mandeville, Louisiana, and help from an OCMC mission team.

Both of these villages are located in the Turkana region of Kenya. The church, under the pastoral care of Fr. Zechariah Echeme, was built with the help of another OCMC team the previous year and was sponsored by Nick and Diane Chronis of Mandeville, Louisiana. Three of the team members, Fr. Vladimir Aleandro, Mat. Susan Aleandro, and Dean Franck, had participated on the previous year’s team. They felt especially privileged to be able to witness the consecration of the church, during which His Eminence Makarios, Archbishop of Kenya, praised the Chronis family for “participating in the building of Christ’s Church”, along with thanking many of the other benefactors who have helped and given to the church.

OCMC Teams Director Andrew Lekos, who led the construction team, was moved by the experience: “There were hundreds of people who were able to witness the consecration of the church.” Mr. Lekos also notes “how moving it was to see the names of the sponsors and team members’ family and friends, specifically the Chronis family, being placed in the altar with the relics of St. Nicholas.” Following the Divine Liturgy, the team and the members of the St. Nicholas community took time to enjoy fellowship and celebration through presentations, song, and dance. Not only the men and women in attendance gave praise, but also the children were giving thanks. The celebration concluded with an agape meal.