Posted on 6 Μαρτίου, 2015 by ierapostoli

Recently, OCMC Executive Director Fr. Martin Ritsi was invited by His Eminence Amphilochios, Metropolitan of New Zealand, to visit the newly-consecrated Holy Trinity Orthodox Church in Fiji. The opening of this church in early February was a major milestone in the mission work that has been undertaken by His Eminence in Fiji. Through this missionary outreach, the Church in Fiji has grown significantly since 2006 and is now home to four churches, a monastery, an orphanage, four Fijian Orthodox clergy, and 3 nuns (one Australian and two Fijian). Soon there will also be a shelter for women. 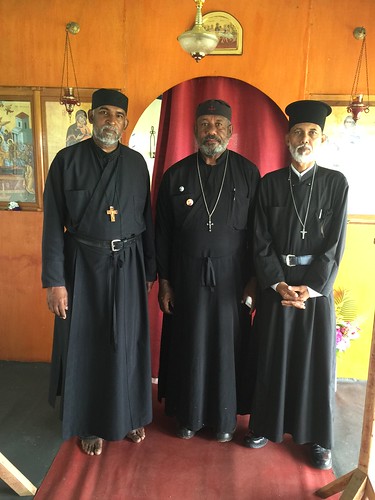 Upon his return, Fr. Martin shared with the Mission Center staff images and stories from this nation of about 300 islands in the Southeastern Pacific Ocean. Fiji is much more than the manicured high-end resorts that may come to most people’s minds. It is a lush, mountainous, temperate, and fertile part of the world, and the Fijian people are renowned for their warmth and friendliness.

It is in this environment that His Eminence has begun to share the Orthodox Faith. People have been drawn by the ancient liturgical practices of the Church and its deep mystical spirituality. People will be drawn to His Eminence wherever he goes, whether an orphanage, a shopping mall, or a church and begin inquiring about the Faith.

OCMC has begun exploring the possibility of sending long-term missionaries to serve under His Eminence in the Archdiocese of New Zealand. Please keep us all in your prayers during this time of discernment.

Fr. Martin remarked how similar Fiji feels to parts of Western Kenya and Tanzania. These lands have seen the explosive growth of the Church in the past. With the blessing of the Father and through the guidance of the Holy Spirit, may His Eminence and all those called to serve in Fiji continue to plant the seeds of Christ’s Church in this fertile land as well!